I’m a southern girl, and I love biscuits.  I grew up on biscuits.  My grandmother and my mom made them exactly the same way.  They’d take the flour bowl out of the cabinet.  It was full of flour and a hand sifter, and covered with an old pie tin.  They’d sift the flour, make a little hole in the mountain of flour, add a dollop of lard, and a small amount of milk (usually sour) and mix gently by hand until it “felt” right, all the while pulling flour into the dough as needed.  Baked in a hot oven in a cast iron skillet, these biscuits were simply amazing.  We had them for breakfast with red eye gravy, or syrup, and with every meal.  You could split them in half like english muffins when they were stale and toast them off with dots of butter under the broiler.  Mercy.

I’ve missed biscuits something fierce since going gluten free a few years ago.  I’ve had some different gluten free breads, buns and pastries, and some of them hit the mark; most do not.  They are lacking in flavor and texture and I just avoid them rather than eat crappy gluten free versions of them.  My plight is further complicated by being allergic to nightshades, which includes the popular gluten replacer, potato starch.

Out of all my cooking skills, baking is the weakest.  So when I went in search of a nightshade free/gluten free flour replacer that had a proven track record for “most baked goods” and a 1:1 replacement, I was super happy to stumble on a little blog called “Art of Gluten Free Baking“.  I was even happier to make her Gluten Free Flour Mix and use it in some old fashioned rolled dumplings.  This gave me hope!  I dug a little deeper.  A biscuit recipe?  YES!   Go make the flour mix right now, and immediately after that, make the biscuits!

I’ve made these a couple of times now.  I won’t repost the recipe, Jeanne does a great job of handling all those details over on the Buttermilk Biscuit Recipe page. 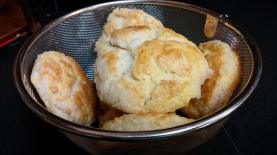 Here are a few tips from my kitchen:

Go on.  What are you waiting for?  Go make some biscuits!