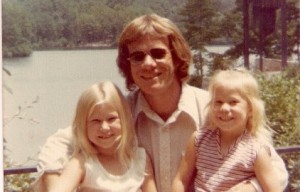 I always thought of my dad as this larger than life, quietly stubborn rebel who flipped a discreet middle finger to the world and found his own drum to beat.

My mother always said I was just like him.  I’m pretty sure she didn’t intend it as a compliment.

“You are a know-it-all just like your Papa,” she would hurl at me when I logically dismantled her explanations about many things, particularly religious things.

My dad was surely going to hell, if you believed my mom.  He was an atheist, a word she would spit out like a bitter lemon.  And he’d had his chances to be saved.  She’d witnessed to him, mailed him bibles after their inevitable divorce, and made sure he heard the word of God.

But in spite of hearing The Truth, he chose to be an atheist.  And he listened to John Denver.  John Denver was equally hell-bound.  He believed that God was in nature, not heaven.

And I thought that was pretty bad-ass when I was seven.

I still do.  And I’m almost forty-seven.